Eye Movements: How the Environment Changes the Way We See 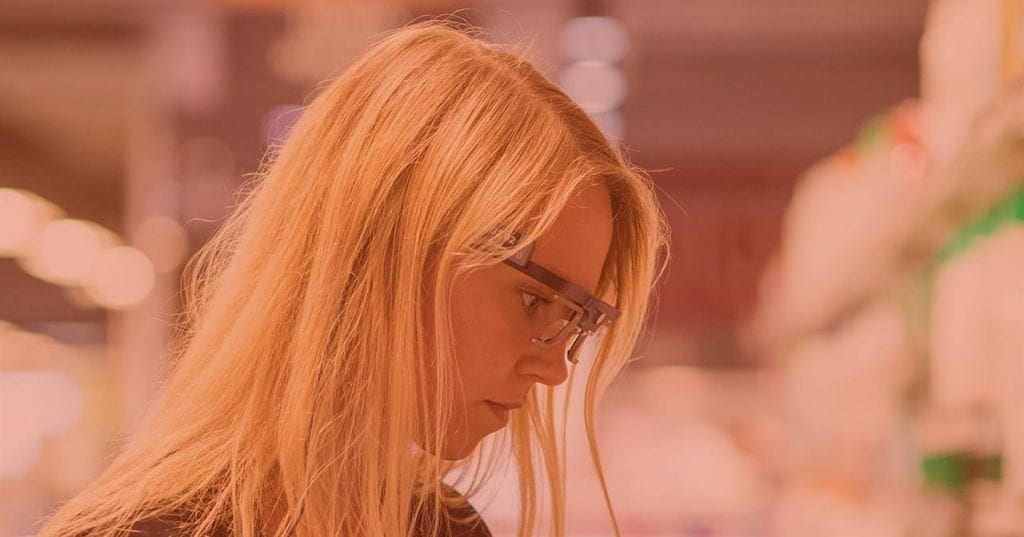 For eye tracking studies, it’s much easier to present stimuli to participants on a screen, rather than to study viewing behavior in real-life settings.

While studies with eye tracking glasses (that allow studies to be carried out “in the wild”) provide higher ecological validity, they are also more complex and more demanding of resources.

But what is often overlooked is the fact that whether the stimuli are presented on the screen, or in real life settings, can also impact the participant’s visual behavior.

How are natural settings different?

One of the prominent features that can bias the results of screen-based eye-tracking studies is that viewers have the tendency to look at the center of the screen regardless of the task or the distribution of features in the scene [1].

This may be a simple response to center the eye in its orbit, or it could simply be a convenient location that makes the exploration of the scene more efficient. In contrast to this, a study using eye tracking glasses in a real-life supermarket found that the tendency to center the eyes is much less robust [2].

It has been shown that in natural viewing environments, saccade amplitudes (how far each saccade moves) are much greater than in screen-based, laboratory settings [3]. Similarly, it has also been found that large gaze shifts are more likely to be made with head movements in natural settings, in contrast to a screen-based setup [4].

A study that involved showing participants a video taken from the perspective of a person walking outdoors found that eye movement distributions from the laboratory setting only matched the real gaze patterns about 60% of the time.

When participants walked in the real world, they selected objects with head movements, and their eyes tended to stay fixated on a ‘heading point’, that was slightly above the center of the head frame-of-reference. In contrast, when the same video sequence was shown on the screen, participants shifted their gaze more often to the edge of the visual field [5].

Real-world behaviors differ from screen-based setups in that the viewer is also an agent within the environment and can partly control the dynamics of the scene by moving around and interacting with objects [6].

Studies of eye movements during natural behavior show a strong link between the actual behavioral goals and overt visual attention. For example, it has been shown when people carry out real-life tasks, all fixations fall on task-relevant objects and the range of fixation durations is wider, reflecting the acquisition of information that is required for the task at hand [7].

This means that in natural tasks, attention serves the purpose of extracting information and coordinating motor actions. Screen-based setups, in contrast, rarely involve any active manipulation of objects [8], and the attention may therefore be allocated in a different manner.

Further to this, when stimuli are displayed on a screen, many depth and motion cues are absent. As the observer’s viewpoint in a still image is fixed, the stimulus context is limited, and the dynamic, task-driven nature of vision is not represented.

The size of the stimulus display has also been shown to impact information processing. As an example, a study that compared visual search on large and small shopping displays found that larger and more realistic displays tend to promote faster search times.

What drives our gaze guidance?

While some studies suggest that stimulus-driven, bottom-up attention dominates during the early phases of viewing [11] [12], other studies have shown that top-down cognitive processes guide fixation selection throughout the course of viewing.

For example, viewers’ initial fixations still tend to land on meaningful visual areas, such as faces, even when they are reduced in contrast and do not stand out [13].  Both visual conspicuity (how apparent or obvious something is) and semantic importance (how meaningful something is) play a crucial role in terms of where people look.

Neuroscientific findings also support the notion that visual attention is dependent on the distribution of semantic content in a scene, and more specifically, that salience is encoded based on novelty and reward (the more novel and / or rewarding a stimulus is, the more likely it will be paid attention to).

From that perspective, the two central factors that guide attention can be summarized as value considerations (reward) and uncertainty, or the need to acquire new information (novelty) [15].

In eye-tracking studies that involve a search task, the viewer’s goal is to reduce spatial uncertainty, as the object of interest needs to be distinguished from other components of the scene (distractors). Similar to this, under a choice task the goal is to reduce preference uncertainty [16].

Both conditions also entail some value considerations and imply that fixations are essentially goal-oriented. This also applies to free-viewing conditions where no task or goal is defined. In such situations, viewers choose their own internal agendas that guide their information intake [17].

It is especially evident in real-life environments and during natural behavior that there is an intimate link between where viewers look and the information they need for the immediate task goals [8]. For that reason, to understand the principles that underlie fixation selection, the eye movements must be considered in the context of behavioral goals.

As the above examples show, there are a great number of factors that can affect how we allocate our visual attention. When studying visual attention, we should not only focus on the impact of stimulus-based features, semantic content, and oculomotor biases, but we should also keep in mind that gaze guidance is highly dependent on the study setting, and be careful about the degree to which we generalize findings from laboratory settings to real-life environments.

For more information about the use of both screen-based eye tracking, and eye tracking glasses, download our free guide below: